The Marketing Technology Landscape grows to 8000 solutions in 2020

As every year since 2011 Scott Brinker publishes the "Marketing Technology Landscape Supergraphic". It presents all Martech solutions in one large graphic, which Scott Brinker underpins with facts and figures

In this article we have summarized some interesting, exciting and above all astonishing facts for you. What is new in the year 2020? What has changed and what has remained the same? Where are the trends heading? We also explain the new design of the Landscape 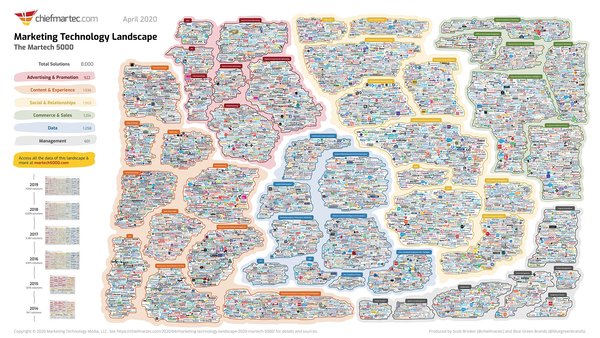 Source:  https://cdn.chiefmartec.com/wp-content/uploads/2020/04/martech-landscape-2020-martech5000-slide.jpg
Interesting in the analysis of the graph this year is, on the one hand, the increase in solutions compared to last year by 13.6%, from 7040 Martech solutions in 2019 to 8000 this year. This is despite the fact that a total of 615 Martech companies, which were still part of the chart in 2019, are no longer there in 2020. Either because they are consolidated with another company or simply no longer exist. In the wake of this, however, the pace and growth of new companies is extremely fast: Nearly 25% of companies in 2020 have been created. Just think about it - in this graph, one in five Martech companies is new and did not exist last year. The largest growth, 25.5%, of new start-ups is in the "data" category, which includes software innovations, for example. This is another interesting figure that you should savour: Since 2011 we have seen a growth of 5233% of this landscape.
Another interesting feature of this year's graph is the novelty of its presentation. The main reason for this is that the thousands of logos fit better into the layout. Previously, when small changes were made in certain boxes of the layout, for example when a new logo was added, in some cases all other logos that were already in the box had to be rearranged. However, thanks to a clever solution from the Blue Green team, half the layout time has been saved this year. They simply adapted the box to the logos and not the other way around as they usually do
Finally, it should be mentioned that the records were made BEFORE the Corona crisis. The effects of the pandemic on the Martech industry will be shown next year in the 2021 analysis
You would like to learn more about more? Here you get to the official article in the English version